Holcombe Ranges is an army camp, opened 100 years ago for First World War training. There has been very little development in the area, except for the camp itself and as a consequence the area, though farmed in part, has a very 'natural feel' to it. In addition to the range there is mature woodland, young plantations, many water features, mining spoils with contour detail, plus open moorland for the longest courses. Most of the area is fast runnable terrain, though steep in places.

Prior to 2015 the area had only once been used for orienteering competition. That was in 1972 for the British Night Championships!

* Postcodes are not very precise in some areas, so don't rely on them for an exact location.

click/tap photos for a larger version 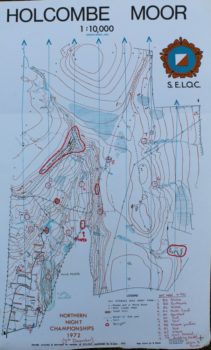