The Hurstwood map covers 12 sq km from Hurstwood Reservoir to Cliviger wind farm. The area has been used for orienteering on and off since the first map was produced from a photogramatic plot in 1989. Unfortunately the origins of the map pre-date modern methods and only paper copies existed. Today's map has been digitally recreated with the benefit of OCAD, Lidar and GPS, and has been progressively resurveyed from 2012 to 2018.

It is a large area of moors, reservoirs and a complex maze of spoils, large and small, from old mineral workings. Unusual features include horizontal spurs, originally spoil tips, and lines of cannonball-sized stones which are slow to run along. Shaley areas that do not impede the runner are not marked. In many of the unworked areas there is tussock grass, shown on the map with the wide undergrowth symbol, which is generally very slow to run. The edges of theses areas are indistinct and should not be relied upon for navigation. The area is 95% open moorland where contour interpretaion and compass work are the key navigational skills.

We are idebted to the land owners, United Urtilities, the tenant farmer Michael Holmes, and Natural England for permission to hold events on this South Pennines SSSI area. Sensitivities to nesting birds, peat hags and bogland are observed.

Cliviger Hushings: Glacial eratic limestone boulders, originating from Yorkshire, littered this gritstone area like manna from heaven. Naturally the locals made good use of this gift, leaving behind the lime extraction spoils. Lime extracted by this method was used in agriculture and for building in earlier centuries.

* Postcodes are not very precise in some areas, so don't rely on them for an exact location.

click/tap photos for a larger version 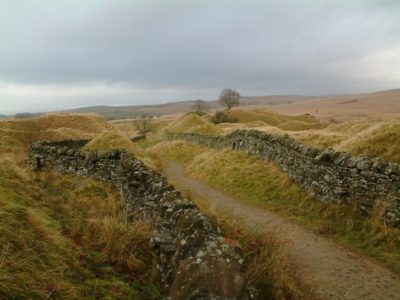