LOST PROPERTY - all lost property has now been claimed.

As on-the-day organiser I would like to thank so many people who together put on an excellent event. Firstly, a huge thanks to Bridget for all the meticulous work she put in prior to the event. Secondly, to Kevin and George who produced some testing courses over testing terrain. Thirdly, to all the volunteers who turned up on day and put in tremendous shifts all day.

Our original plan was to park everyone in rows across the field, but conditions dictated a chevron approach with overflow on the road. It worked. Thank you for bearing with us.

Finally, thanks to our two hosts: Michael and the scouts at Bold Venture Park and John whose farm provided all that we needed to manage Sunday’s event in difficult conditions.

As usual, PFO rose to the occasion. Take it easy now for Christmas.

Where to start? At the beginning I suppose.

More than half the controls were put out the day before for the Darwen Moor Night event, plus a few extras only used for the day event - but all these needed waking up in the morning. Max Cole rose long before dawn to put in a 2 1/2 hour stint, through adverse terrain and adverse weather, just so that early starters could save half a second at each control. This left Kev and self to put out 19 controls, plus taping and stile making. Max again stepped in to help with the last few controls.

At that early time of day the rain, sleet and hail lashed alternately. So you must all feel pretty smug that no rain fell throughout the competition. If you had time to admire the view you would have seen heavy rain passing us by. A bit of Irish luck must have fallen into the eye of the storm!

My comments for the night event apply equally to the day event. Kev Controller "suggested" keeping shorter courses out of the knee deep pillows of undergrowth. I half complied such that the courses were better and winning times were in the expected range.

My thanks must go to all helpers, Kevan as Controller for his wisdom, John as on-the-day Organiser for his patience, Bridget for permissions tenacity, plus a host of other PFO members for parking, Registration, SI, Start and Finish and, above all, those who stayed behind to clear the moor of kites, yellow pegs, bit of tape and step stools. A job well done.

PFO have parked in John Smith's fields for over 50 years (!) for events in neighbouring Tockholes (see PFO Tockholes Regional on 16th May 2020, then AIRE event 17th) but this is the first time for Darwen Moor. We are indebted to John Smith Junior for access to this event and John Smith Senior for many many previous events. We have still not managed to persuade either to come and compete!

In summary, I believe the courses were tough, fair and, deep down, satisfying. Retirement rate overall was 13%. No one complained about the map, just the terrain!

Thank you all for partaking, especially those 11 competitors who came to both events. Congratulations to all course and class winners and to all participants and who exceeded their expectation.

Many competitors will have been surprised by what appeared to be several "forest rides" in open terrain.

This was my first time as a controller for orienteering events and to say I was apprehensive would be a huge understatement. I have previously ducked the role of controller on the grounds of lack of knowledge of the finer rules of the game and confidence in my ability to help provide a high-quality event. The persistence of the events planner and mapper, George Crawford-Smith and my experience of his previously planned events convinced me otherwise. Working with the team of George, Bridget Jardine as pre-event organiser and John Ashton as on the day organiser was an absolute joy. On top of that I was lucky enough to secure the wisdom of Judith Wood as my mentor for some of the finer controlling elements.

In hindsight I am glad that George talked me into the role even though it was a tough job due to a new mapped area on very challenging terrain and two very different events running back-to-back. PFO, especially George did a great job with the map and produced some very challenging courses as could be seen from the results.

The best control sites unfortunately tended to be located in the toughest terrain, so it was imperative that we highlighted that aspect by using the undergrowth screen. That proved to be a problem for some on the night event in that the screen apparently disguised some of the contour and ground details. Another issue faced by a lot of people on the night event was the identification on the ground of the ‘linear trace’ shown on the maps by the linear forest ride symbol. These were areas that the countryside rangers had cut back the undergrowth, which made the ground far more runnable. It seems that most people did not pick up on the additional symbols on the event website or the additional symbols shown on the map. Perhaps in hindsight something could have been mentioned on the start line but there was already a heap of more important safety information to impart.

I was initially concerned that we would come in for severe criticism for putting courses through such energy sapping and frustrating tussocks and moss mounds. My fears proved to be unfounded as most found their courses challenging, especially during the day with the high winds but not unfair. It tested the navigation skills of even the best of orienteers as it was not a runners course.

As for me, 3 times on the whole of that area is now deeply burned into my memory and goes down as one of the toughest areas I have ever encountered. I made some mistakes, which some people kindly advised me of after the event, which are duly noted for the future. I cannot thank George enough as he put a huge amount of time in on the mapping and planning and actually listened to me. Perhaps I might do some more of this controlling lark in the future but not for a little while for the time being.

Darwen Moor is a new area for orienteering.

Darwen Moor is managed moorland and a water catchment area. Past quarry activity has left its mark. It is high and exposed so dress accordingly.

The previous night, Saturday 7th, there will be a NWNL Darwen Moor Night event over some of the same terrain. Night Orange, Night Green and Night Blue courses only. However, night Registration will be in a different location to the day Registration.

We are indebted to the landowners for permission to use the area - United Utilities, Blackburn with Darwen Borough Council and David Livesey, owner of land and shooting rights.

At New Barn Farm off Tockholes Road (same as for some previous Tockholes Woods events).

Best approach from M6 north and south, and from the east is via the M65. Exit at J3 and head south on the A675 for 6k, past Tockholes Woods on your left to a T-junction left signed "Tockholes". After 2k, New Barn Farm access track is on your right.

£1 parking fee, then park as directed. Parking field is currently much firmer underfoot than when we last parked here!

Darwen Moor, most notably identified by Darwen Tower visible from the M65, is a wild area of upland vegetation. There has been historic quarrying, which has left behind many landform features.

Route to Start from Registration is 800m almost level, then a with 40 steep climb to the Start line. Allow 10 to 15 minutes.
Return from the Finish is 150m downhill.

Control descriptions: On the map. Loose copies on waterproof paper available in the Start lanes.

Safety: This is a winter event over high exposed ground - WHISTLES and WATERPROOF JACKETS are MANDATORY - unless specifically relaxed by the controller. Hypothermia is a real risk so carrying hats, gloves, additional thermal layers and waterproof trousers may also be necessary. Be prepared.

Mobile phones may be carried as a safety measure only. Help number is 07546-147925. Respect the fundamentals of orienteering and do not use your phone for navigational aid.

The area is characterised by gently undulating moorland top, but with steep escarpments to the west, north and east. Vegetation is variable.

Pits and Depressions: There are lots! Many are widely separated and therefore marked individually on the map. However, others are in clusters and too numerous to mark all separately. In this case the most distinct depressions are marked with less prominent ones shown as surrounding broken ground. DANGER: Do not run through any depressions, large or small, as many have bouldery bottoms hidden by grass or water and may also have secondary drops. Only enter depressions that have a control in them and only on the side where the kite is located. Always run around other depressions.

There is a small area of pits and depressions that has been marked as OOB on the map. However a good path passes through the middle of this area. Stakes and tapes will indicate where you MUST keep to the path and watch for steep drops to either side.

Ponds: All ponds are man-made. All are marked on the map with an uncrossable bank line. They are of uncertain depth - you must keep away from the edges.

Undergrowth: 90% of the area is open moorland of variable runnablility. In general the higher up you are the easier the terrain. The slowest parts are indicated by the "Undergrowth - Slow Running" (wide green pinstripe) symbol. The boundaries are not exact and should not be relied on for navigation. Brambles, bracken and gorse only grow low down on some of the scarp slopes.

Linear Trace (same symbol as a Forest Ride): Parts of the moor have had vegetation removed providing good running in one direction. Generally there is no path. These lines are indicated by the "Linear Trace" symbol.

Plank bridges: There are a number of wooden plank bridges in the southern half of the area. They are very slippery at this time of year. Take great care

Mandatory stream crossing: Green and longer courses will cross a stream at a mandatory, and safest, point. Follow a taped funnel from a gateway to the stream. Downstream it is deep and steep and dangerous. Upstream is fenced with difficult vegetation.

Fence crossing: All courses will cross some fences at mandatory crossing points which will be gates, stiles or natural breaks. Do not cross any fence highlighted with a purple "Uncrossable Boundary" symbol. Fences shown as broken/low may be crossed at any suitable point. There are also some optional crossing points shown, which only affect some courses.

No dogs on courses. This is grouse country.
Dogs may be freely exercised in Tockholes Woods adjacent to parking, but must be on a leash in the parking field. This is sheep country. 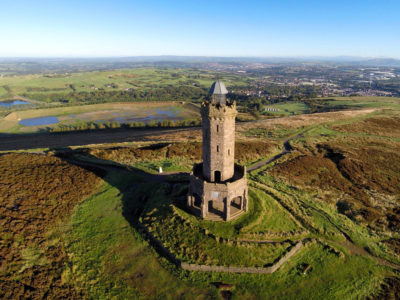 Sunnyhurst is beyond the reservoir.
Credit: Library