Tough one this! I mean of course, tough to plan.

Kevan Latham suggested, as Controllers do, that I should minimise the number of passes through the slow spongy-mossy-heathery stuff, so courses with longer path options were the final offerings. Some would say I didn't follow his suggestion at all!

Even without any of the slow undergrowth, the navigation would have been tricky, especially in the areas of sketchy shallow features. Good attack points and accurate compass work were key. Looking at Routegadget it seems that the lead competitors mastered this admirably. Because of the slowness of the terrain, some thought they had done badly, only to discover a top 5 placing. The Night Blue winning time was actually quicker than my estimate of 65 to 70 minutes. Green was won in just under my estimated 60 mins. One consequence of the tough going and tricky navigation was a high fall-out rate: 19% overall = Blue 2%, Green taking the major hit of 28% and Orange 0%. Too high overall.

Everyone agreed it was tough, but some stated they had enjoyed their course!

Despite the conditions there was only one mishap. A failed head torch lead to a bail-out to the north instead of to the east, eventually reaching the A666 at the wrong end of town. A call to the organiser and a rescue vehicle was dispatched. No names mentioned.
First lesson: make sure your back-up torch is powerful enough to read a map by.
Second lesson: For night events, always print an emergency telephone number on the map.

A word of thanks to the many PFO members who helped putting on this Night & Day event.
First Bridget Jardine (who couldn't be here this weekend) for all permissions work and pre-event organising - 3 landowners and a Scout Hut to negotiate for. John Ashton for on-the-day organising everyone and everything, including the excellent fare of soups, rolls, cake and beverages. Max Cole for volunteering to help put out controls and for always being in the right place to put out more than his fair share in cold, blustery, drizzley weather. Then all the other PFO helpers for Registration, SI, first aid (none needed) and Start duties. And, of course, those who offered succour to cold and exhausted competitors.

Finally, thanks to Darwen Scouts for the loan of their warm, dry and comfy scout hut, plus kitchen and loos. Perfect location for comparing route choices and cursing the planner. Plus, of course, a suitable pillar for the Finish banner!

Many competitors will have been surprised by what appeared to be several "forest rides" in open terrain. Several queried this after the event as they did not know what to expect.

This was explained in the pre-event information thus:
"Linear Trace (same symbol as a Forest Ride): Parts of the moor have had vegetation removed providing good running in one direction. Generally there is no path. These lines are indicated by the "Linear Trace" symbol."

Whereas in daylight the linear traces indicated were obvious when crossing them at right angles, but at night they were much less obvious. Finding them was a bonus in both speed and attack point certainty.

I am sure that you will in future encounter this symbol on other maps, especially in managed moorland areas.

NWNL league table after the first round event at Arnside Knott on 16/11/2019 can be obtained from .

Safety: This is a winter event - WHISTLES and WATERPROOF JACKETS and RESERVE LIGHTING are MANDATORY and must be worn or carried - unless specifically relaxed by the controller. Carrying hats, gloves, additional thermal layers and waterproof trousers may also be necessary.

Mobile phones may be carried as a safety measure only. Help number is 07546-147925. Respect the fundamentals of orienteering and do not use your phone for navigational aid.

Permissions:
We are indebted to the landowners for permission to use the area - United Utilities, Blackburn with Darwen Borough Council and David Livesey, owner of land and shooting rights.

The next day, Sunday 8th, there will be a Darwen Moor Regional event using some of the same area. However, parking and registration will be at a different location. Usual courses.

On street parking in either Manor Rd (BB3 2SN) or Belgrave Rd (BB3 2SF) surrounding Bold Venture Park in Darwen. Please park on one side of the road only, to allow easy flow of local traffic.

Registration is in the Ashton Kiosk (aka Darwen Scout Hut) on your left immediately after you turn into Manor Rd.

Darwen Scouts will provide warm shelter, toilets and a tolerance of muddy footwear! They will also provide soup & rolls, cakes and hot & cold drinks for a modest donation. No need to book in advance.

If you wish to warm up before competing, please use the route to the Start. Do not use terrain to either side or the park.

Darwen Moor, most notably identified by Darwen Tower, visible from the M65, is a wild area of upland vegetation. There has been historic quarrying and mining, which has left behind many landform features. The area will provide challenging night navigation.

Route to Start from Registration is 700m and 70m climb. Allow 10 minutes.
The Finish is adjacent to Registration.

Control descriptions: On the map. Loose copies on waterproof paper available at Registration and the Start.

Safety: See note above about mandatory equipment and use of mobile phones.

The area is characterised by gently undulating moorland top, but with steep escarpments to the west, north and east. Vegetation is variable.

Pits and Depressions: There are lots! Many are widely separated and therefore marked individually on the map. However, others are in clusters and too numerous to mark all separately. In this case the most distinct depressions are marked with less prominent ones shown as surrounding broken ground. DANGER: Do not run through any depressions, large or small, as many have bouldery bottoms hidden by grass or water and may also have secondary drops. Only enter depressions that have a control in them and only on the side where the kite is located. Always run around all other depressions.

There is a small area of pits and depressions that has been marked as OOB on the map. However a good path passes through the middle of this area. Stakes and tapes will indicate where you MUST keep to the path and watch for steep drops to either side.

Ponds: All ponds are man-made. All are marked on the map with an uncrossable bank line. They are of uncertain depth - you must keep away from the edges.

Undergrowth: 90% of the area is open moorland of variable runnablility. In general the higher up you are the easier the terrain. The slowest parts are indicated by the "Undergrowth - Slow Running" (wide green pinstripe) symbol. The boundaries are not exact and should not be relied on for navigation. Brambles, bracken and gorse only grow low down on some of the scarp slopes.

Linear Trace (same symbol as a Forest Ride): Parts of the moor have had vegetation removed providing good running in one direction. Generally there is no path. These lines are indicated by the "Linear Trace" symbol.

Fence crossing: All courses will cross a fence at one of two gates nearing the Finish. Other fences may be encountered that are broken or low. These may be crossed at any suitable point.

No dogs. This is grouse country. 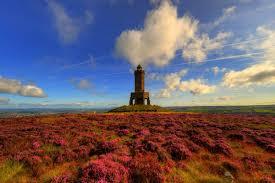 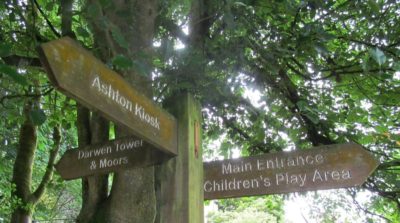